City of Shadows is a turn based strategic crime management game where 4 crime lords fight over the power of the city. 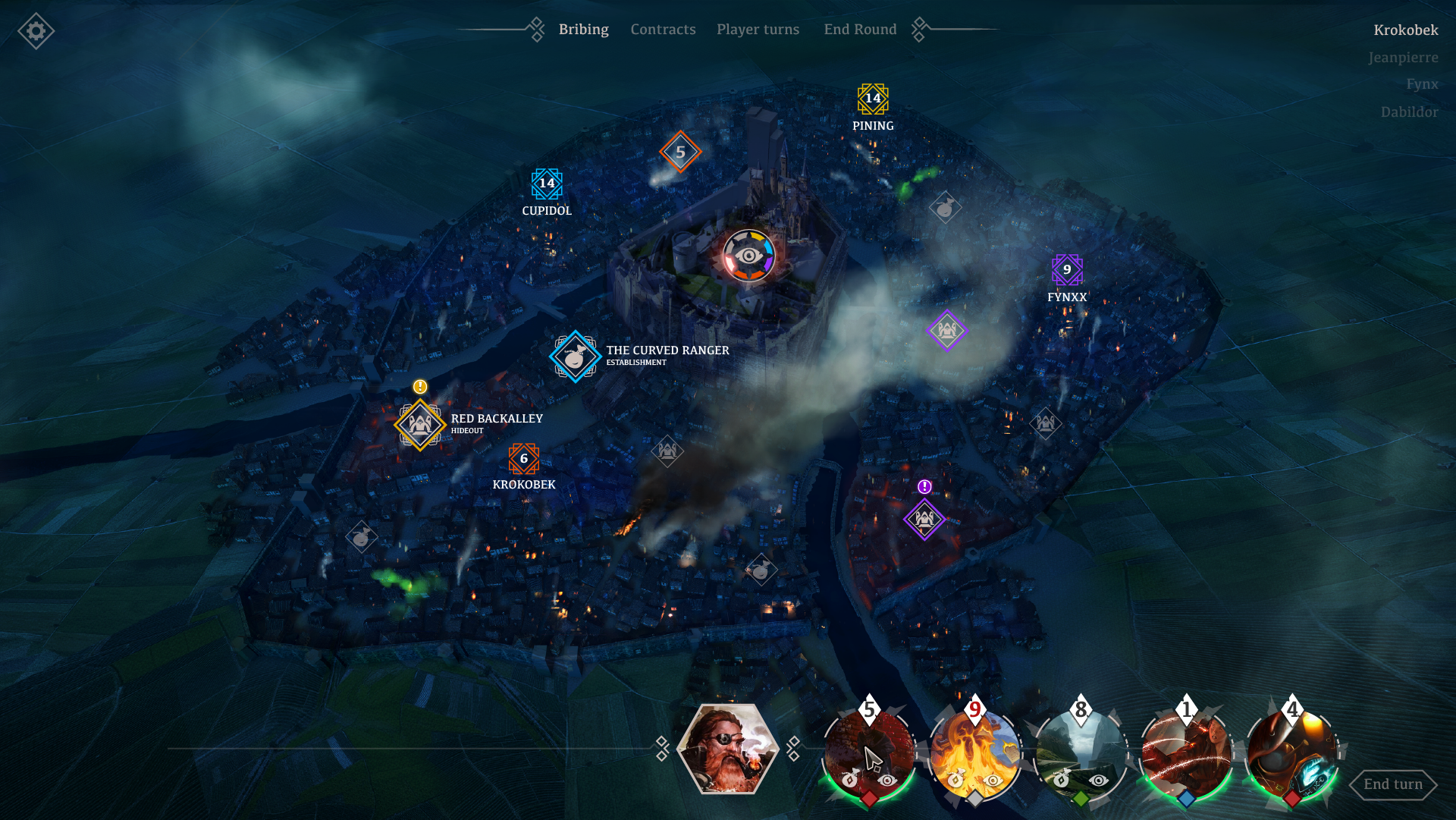 I was one of two game designers in this project. I was responsible for the following aspects:
Click on any subject to jump to that part.

What I have learned from this project.

We made City of Shadows for a client. This client had been working on the game's design for some time before working with us. They also already had some game design layed out for us. I was tasked with reading this document and keeping true to as much of the design as possible while the other designer made his own design based on the meetings with the client.

When the other designer was done we layed both designs next to each other to see what differences there were. It was actually pretty close design-wise. Then we just condenced the design to the bare minimum and built from there. 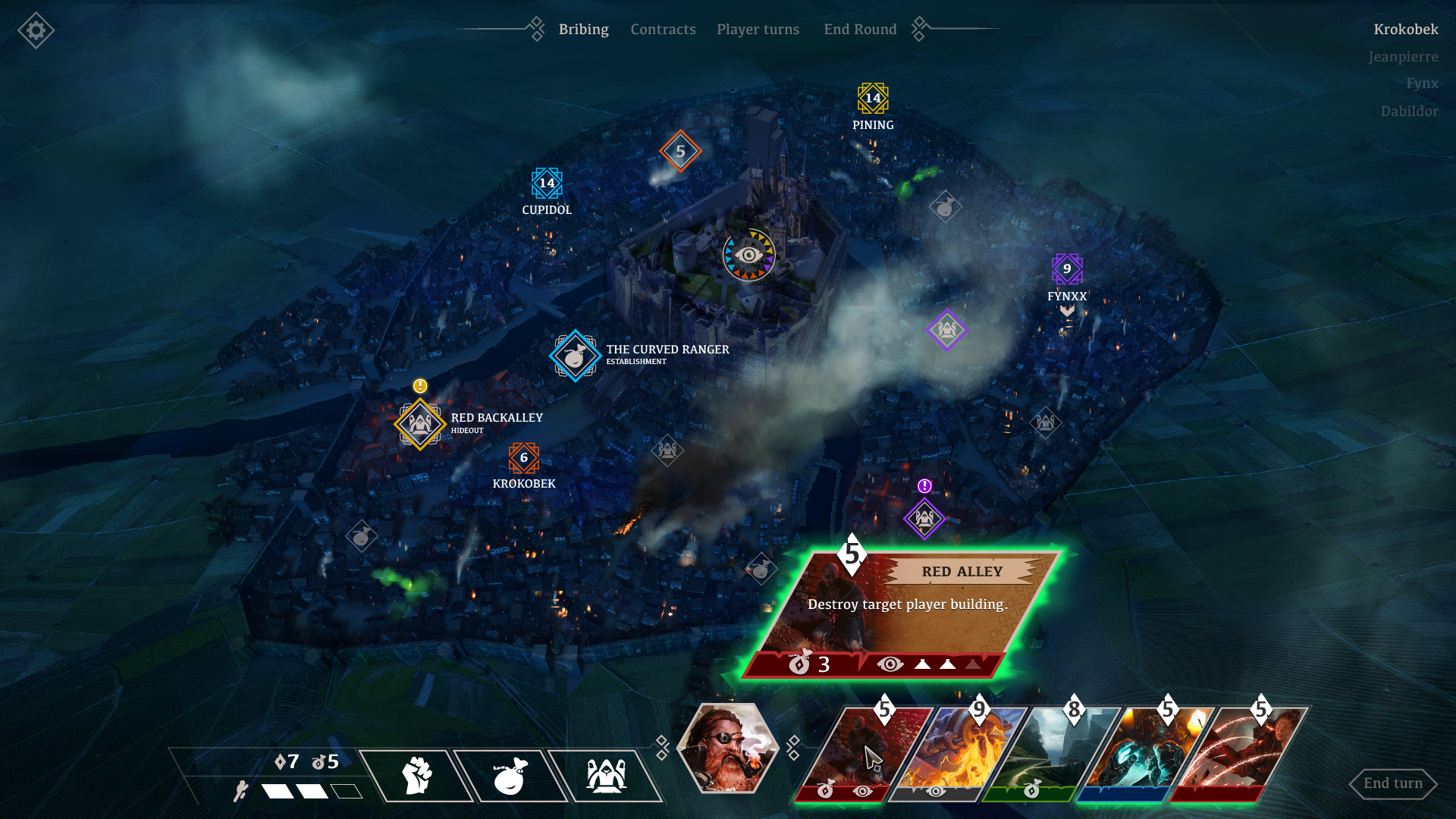 With the game being a turn-based strategy game, it is fairly easy to prototype as a board game. We condenced the game to it's bare minimum and started testing. First internally with the Artists and Developers and later with external people. I was on and off "game master" to lead the game and announce the different stages of the game. With these tests we could clearly see what mechanics worked and which needed work or could be scrapped entirely. 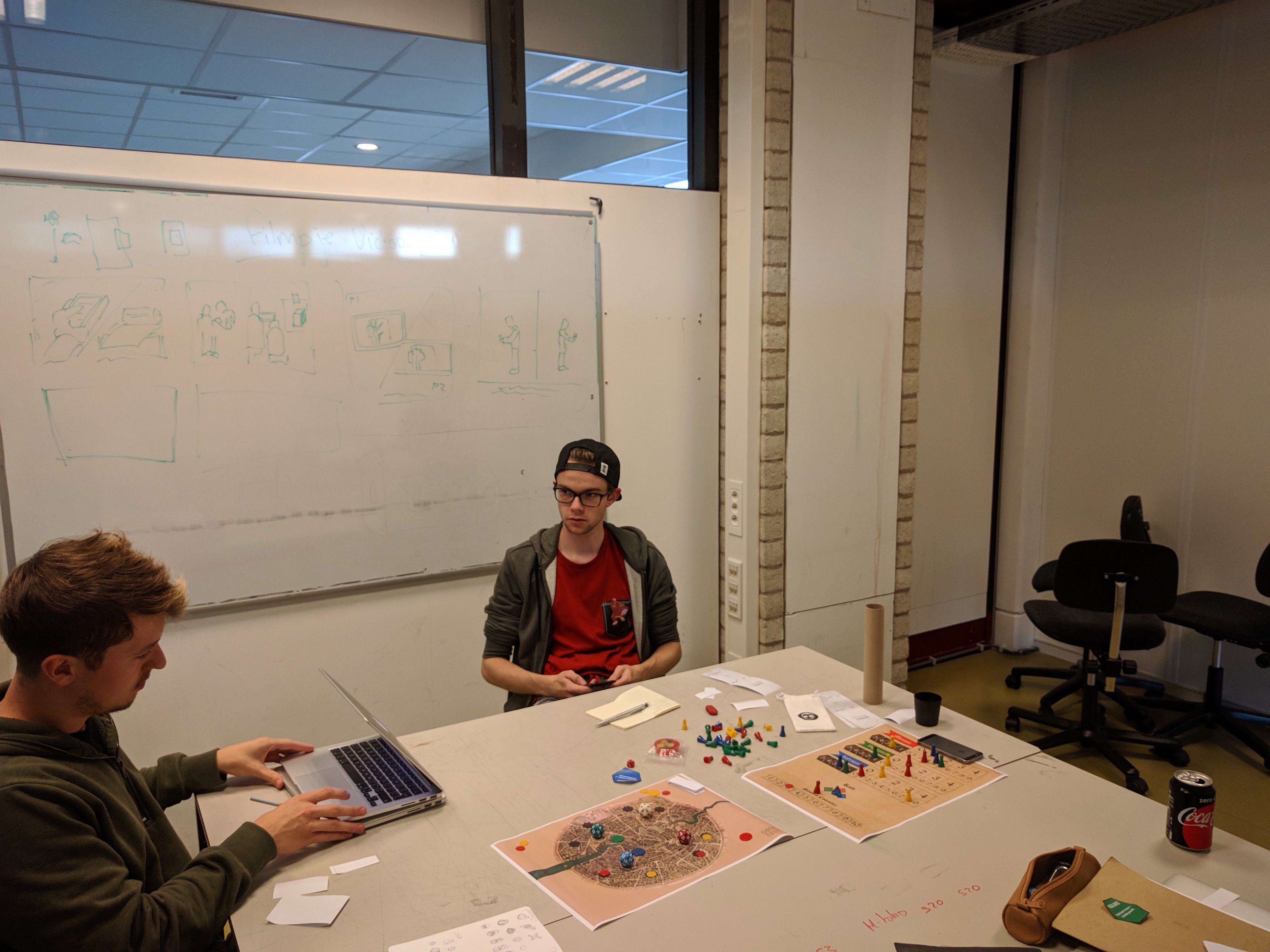 To explain the design to the developers and artist I made various game design documents. In addition to a large Wiki we used in our Git repository, I also made these "One Page Design documents". These are visual documents to explain certain mechanic. These documents in addition to the Wiki needed constant updating. A sample of the documents are shown below.

I was responsible for the initial wireframes of City of Shadows. With a complex game like this, clarity is very important. I tried to segmentise each phase of the game so it's clear what the player is expected to do. In the top right hand corner of each game screen you can see which phase currently is active. According to these wireframes, the phases were: Pre round, Upkeep, Draw, Fence and Raid.

Pre round is where the players get all information regarding this round. What the City Eventis and which player is the Raid target.

In the Upkeep, players get paid, actions that take one turn get resolved etc.

Draw is the first phase where the player actually takes action. The player draws five Opportunities and decides what to play: An Action or an Opportunity

Fence is where the player can launder their money from Dirty money to Gold (usable money). Later this step was changed to an Action which could be played during Draw

And the last phase is Raid. Here the Nobles look which player did the most harm to the city (played the most aggressive Opportunities) and punishes them by raiding their establishments. This means destroying all the Dirty money they are laundering there.

With City of Shadows being a turn-based strategy game played with cards. I also designed a heck ton of cards. But more importantly I tried to make a formula to make balancing them easier: The cost of the card was all the effects on the card added up minus some arbitrary number. This helped us a lot in the beginning but to make it more fun and a little unpredictable we needed to deviate from this.

To balance all these cards, we made balancing sheets in Google Sheets. In this sheet we could easily add cards and see what cards were missing to make even amounts of cards for all types. I went a little overboard on conditional highlighting to make it more visible what all the values did to the balance of the game. For instance: the higher the price, the darker the color and color cards based on the type they were. 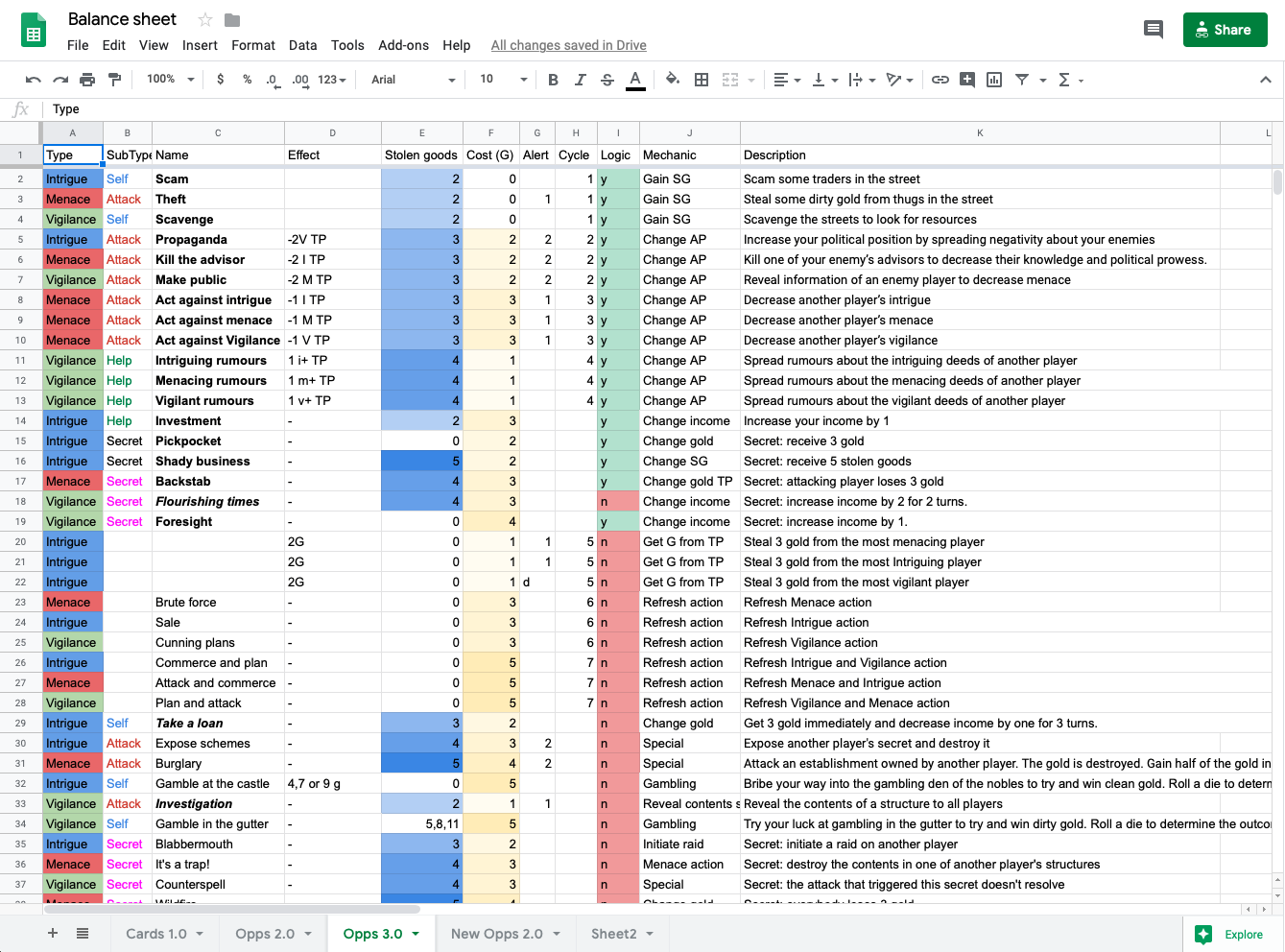 For an exposition City of Shadows was attending, we decided to make an instruction booklet for players to reference while playing. I was responsible for making the booklet but got help from the other designer to tidy some aspects up. This was the first time we sat down and tried to write all the rules and systems as concise as possible. This was no easy task for a game this complex and makes you appreciate the people who write instruction booklets for other games.

City of Shadows was the first game I really got to work together with another Game Designer. Usually I work alone so it was a nice change. This made me realise how much better games can be if different people with different ideas work together and bounce ideas of each other. The other game designer is more familiar with board games so his raw knowledge was of great use while I am more specialized in iterative design. We completed each other really nice in this project.